Kaie´s thoughts about comments and communication

Some thoughts that came to my mind, when reading Wey´s posts and Bateson´s text about learning as the changing of choice(s) one is able to make.

From “reply to Jenny”, Wey wrote:
“One other problem is a more pedagogical one: How can I raise and keep up curiosity and a childlike sense of wonder in face of constant uncertainty and changes (For kids, there are benevolent parents providing safety and stability after all…)? And how can I keep up communication with diverse people all over the world to exchange views without tiring?”
I´ve always thought that in a way it is much easier to teach young children from age 4 to 10. It seems that it is easier to amaze them and keep up the curiosity in a classroom. On the other hand, working with teenagers (or adults too) can be more challenging – it takes more effort to keep up the curiosity lets say in Arts, because there are so many other things in life for them – friends, relationships, movies and so on…BUT, because life is so diverse and people in it more diverse there will always be things to surprise with in the classroom:). Still, I agree with Wey´s point that “effective cognizance will some time lead to disorientation, anger, guilt or frustration, too. This is something we have to take into account”. I´ve had some students who started to cry a couple of times in class. Once it was a case of the “right red color” – this boy couldn´t find the right color from the pencils (it had to be the color of the red Lego piece) and he couldn´t draw. For the next time he had to take his Lego magazine and show all of us, which kind of color is “Lego-red”. Then there was a case, when a girl started to cry when we painted aurora (revontulet in Finnish). It was a little lesson, were I asked them to paint aurora. Through that we painted the whole color circles, mixing colors and so on. And she cried because she was afraid of the colored paint…So I took her brush, but it into yellow paint, red paint, green paint and showed that there is nothing to be scared of…And she calmed down:)
From “Notes for Noora”:
One more example that is similar to yar bombing is moss art, or moss graffity that I find is very amusing and looks good in urban streets: 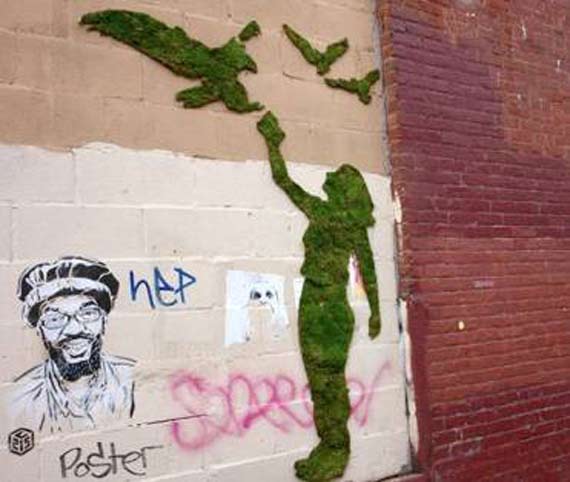 Wey: “What illusion of community, safety and belonging did we use before the arrival of networked social media? ;)”
Maybe those were something like collecting stickers, fog-pics (I am not sure how are they called in English, but they were very popular to collect, when I was 12: pictures of dolls, horses, flowers in very pastelled, foggy colors and hard to see), caps, having a tamagotchi?:)

And about the last comment Wey gave to me:

“We presume that everybody wants to express her- or himself, e.g. within an artistic medium – but does the result, does the expression have to be interpretable? Could it also be meant to be deliberately not interpretable, because that’s what is wanted to be expressed: the lack of an expression for something felt or experienced, but the want to express this lack?”

This is a very good point! In fact, I´ve always thought that the expression doesn’t ´t always have to be interpretable as long as I see that it comes from the heart, or I can feel that the artist is not lying. (How can you tell that is another topic.) When I was teaching young children at art studio, usually after the course parents came and asked what is this picture or sculpture or “thing” that their child has done…And I didn´t know always because I didn´t want to ask their child:) (Usually, when they wanted to tell me, they came and told me voluntarily.) Then I made up something to say to their parent, because I had a feeling that if I don´t know, I would be a teacher “who doesn´t care”. Or there is this other fear, when parent sees that his/her child is using, lets say, too much black color, their cild has immediately something wrong. But it is not so simple – maybe their child likes night a lot:) But usually parents assumed something negative. Very stereotypical – black color=death…?

From Bateson´s text, page 9:
“There is, in fact, almost no formal theory dealing with analogue communication and, in particular, no equivalent of Information Theory or Logical Type Theory. This gap in formal knowledge is inconvenient when we leave the rarified world of logic and mathematics and come face to face with the phenomena of natural history. In the natural world, communication is rarely either purely digital or purely analogic. Often discrete digital pips are combined together to make analogic pictures as in the printer’s halftone block; and sometimes, as in the matter of context markers, there is a continuous gradation from the ostensive through the iconic to the purely digital. At the digital end of this scale all the theorems of information theory have their full force, but at the ostensive and analogic end they are meaningless.”

1)A video from Stefano Mancuso´s TED talk. I especially liked the question he asks from the first part of the talk, showing a picture called “What is wrong in this picture?” and answer is: “Where are all the plants?”
Error in communication?

2)Or another example from John Baldessari, a video made in 1972 – “Teaching a Plant the Alphabet”:
and here a short video about it
In my opinion this is an early approach how to interact with a plant…And I think it shows very well how we estimate the plants intelligence…or how we try to force our “knowledge” to others thinking that they deserve it.

I am a second year M.A. candidate at the Estonian Academy of Arts with a major in Art Education. Currently, I am also taking courses at Aalto University in Helsinki. In Aalto, my main interest lies mostly in courses with focus on e-pedagogy, such as Visual Knowledge Building, Creative Learning Spaces of Future and this one - Shaping Media-Pedagogical Media Theory. In addition to exploring contemporary media-studies/theories in relation to art pedagogy, I am also interested in experimental video, costume and props in theater and film (I obtained a B.A. degree in props and stage design from University of Tartu Viljandi Culture Academy).
View all posts by kaiekaabel →
This entry was posted in Allgemein. Bookmark the permalink.