Some notes to Kaie’s notes…

Getting amazed and seeking amazement

“…teenagers (or adults too) (…) it takes more effort to keep up the curiosity lets say in Arts, because there are so many other things in life for them – friends, relationships, movies and so on…BUT, because life is so diverse and people in it more diverse there will always be things to surprise with in the classroom”
– Kaie

I think Kaie is right there, there will always be something that may amaze us in our world, even for teenagers, adults or aged; with our fellow men being reliable triggers for amazement. Above left: Cartoon by John T. McClutcheon (1912); between wonderment and stun on new media and means of transportation.
Above right: Panel from Carl Barks (1950), “Rip van Donald”, in Donald Ault (2003) “Visionary Synchronicities in Carl Barks Comics.” Comic Art 4 (2003): 44–58; fearful and threatening visions of the future (though ether induced).

So, amazement is originally something that stuns us, makes us seem stupid or senseless; maybe even something dreadful, because we cannot understand it. We do not have (sufficient) experiences or categories to sort it out. Or, as Bateson would have put it, we can act only randomly upon this stimulus until we have some context to connect our perception with meaning, or meaningful action (i.e. we learned in a higher order about this thing, to prevent the same degree of amazement) .

But adults do regularly search for something amazing and stunning. They just prefer a known context, a safe cultural frame for it to happen. Understandably, since not everyone can afford to travel or is willing to risk his or her life to encounter the unknown.
To get amazed, adults visit museums of modern art (like Kiasma), or go to the cinema,  read an exciting new book.
‘Art’ may be culture’s refuge for amazement, or even more so: We expect to be amazed in an art’s context, and we may be slightly disappointed if amazement does not happen there. But we may be also irritated or even fearful, when something amazing happens out of art’s (or a known media’s) spatial, temporal or social confine, like e.g. “Improv Everywhere” arranges, or some pervasive game delivers.

For children, this contextualisation or framing does not exist yet. Whether a museum, the school or their home, there’s always something not categorized, not easily categorizable. They are not yet introduced to the culture like their parents are (“Situated Cognition” by Brown, Duguid & Allen could be read this way).
The contextmarkers for stimulus to be interpreted are not yet as firmly set as with adults.
So, there seem to be two kinds of amazements: ‘safe’ amazement within a known context, e.g. a stunningly beautiful or thought provoking painting; and ‘unexpected’ amazement, when the painting e.g. comes to live and its figures invade our home.

The question still may be: What kind of pedagogical, artistic, therapeutic action corresponds with the kind of ‘amazement’ we want children to enjoy and adults to be open for?

About having not enough and too many colors

“…this boy couldn´t find the right color from the pencils (it had to be the color of the red Lego piece) and he couldn´t draw. (…) And she cried because she was afraid of the colored paint…”
– Kaie

I think Kaie’s example of the two children having problems with colors is quite beautiful. From my point of view (I do not know if this is right), it looks like the boy was angered because there was a lack of the right color, while the girl was frightened because of the abundance of colors:
Not enough choice, or too much to choose from.
It gets really annoying if you want to express something…:

„When people construct objects in the world external to them, they are forced to make explicit decisions about how to connect different pieces of their knowledge. How does one representation fit with another? Which pieces of their knowledge are the most basic? Which are important enough to incorporate into the construction, and which can be safely left out? Which really matter to them and which don’t engage them at all?”
– Uri Wilensky (1993), „Abstract Meditations on the Concrete and Concrete Implications for Mathematics Education“, p.202.

As Kaie hinted on, the South-Estonian people may have found their own solution for this. If there aren’t enough words or too many to express something, just express that you want to express something at all – and mumble. (http://edublog.me/shapingmedia/2012/04/22/kaie-on-blind-spots/)

So, the task of an art teacher may not only to give children or adults a medium to express themselves in, but also to show them strategies if the medium is not able to support what they want to express (for example changing to another medium, modify the existing medium; or mumble).
The task may furthermore not only to give them means of expression, but to create a frame where they are safe to experiment, make errors (Bateson’s only way to learn) and learn to cope with this new extension of their choices.

I guess teaching art is one of the most complex, but also most satisfying activities one can follow. ;) “One more example that is similar to yar bombing is moss art, or moss graffity that I find is very amusing and looks good in urban streets”
– Kaie

I’m fascinated by the combination of manmade forms and the characteristics of a growing and living thing. It is like a reversal of the artform of Topiary (see picture), of cutting plants into specific aesthetic shapes.

“I´ve always thought that the expression doesn’t ´t always have to be interpretable as long as I see that it comes from the heart, or I can feel that the artist is not lying. (How can you tell that is another topic.)”
– Kaie

“It comes from the heart” is already an interpretation, a differentiation of something not conventionally interpretable (is that “another topic”?)… ;)
“Truly heartfelt” is usually not a valued or accepted interpretation. It gets difficult if you are forced to present an interpretation, as you described it quite colorfully.
What kind of expressivity will a child develop, if his/her parents’ first question is always for the meaning of what was just created? I guess the child will, like you, try to please the parents and invent meaning to satisfy them. And when grown up as an adult the child may still act this way, but forgot how this habit came into life in the first place – to give everything a meaning, whether possible or not (on the other hand, the child may become a great and inventive storyteller).

“In the natural world, communication is rarely either purely digital or purely analogic. Often discrete digital pics are combined together to make analogic pictures as in the printer’s halftone block; and sometimes, as in the matter of context markers, there is a continuous gradation from the ostensive through the iconic to the purely digital. At the digital end of this scale all the theorems of information theory have their full force, but at the ostensive and analogic end they are meaningless.”
– Gregory Bateson (1972), “The Logical Categories of Learning and Communication”, page 9 (p. 213 in the book)

Videos and different types of riddles

From my point of view, Mancuso plays with two different set of contexts, to entertain and to amaze. The first context is the common riddle-trope: “Find the n errors we have deliberately inserted into this picture” – so we know that there are n errors to be found; a classic school approach. The second context is to invent an error that we cannot perceive (yet), but have to somehow deduce from Mancuso’s topic and his hints. This second class of errors depends on the lecturer. The same picture of the arch may ‘contain’ different errors when used by an atheist, a physicist, a geneticist etc. It is a kind of enjoyable meta-riddle: What error does the lecturer ‘see’ in this picture. “2)Or another example from John Baldessari, a video made in 1972 – “Teaching a Plant the Alphabet””

I think Baldessari does the same trick as Mancuso: There’s obviously an error in his try to teach the alphabet to plants. But where is the error? Is Baldessari just crazy? Is this art and Baldessari’s goal is just to amaze us? Is our knowledge about plants incomplete, and plants can learn the alphabet? Baldessari points to our established categories, our contexts, and dares us to challenge them (or him).

Another cartoon on art, framing, circular reference, error and communication, made by the german art collective “Rattelschneck”.
The museum visitor says: “I can do that, too!”
The painting shows: “No, you can’t.” 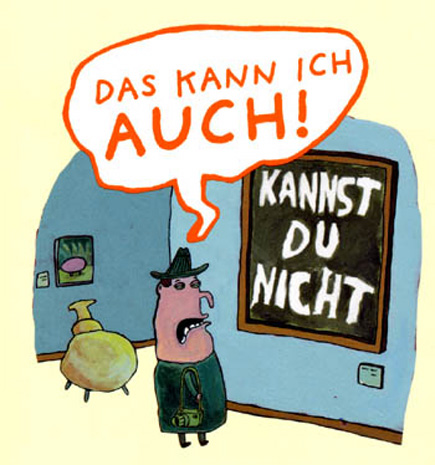 My name's Wey-Han Tan, I graduated 2007 as Diplompädagoge (educational scientist) in Hamburg, and 2009 as M.A. in ePedagogy Design. Currently I work at the project "Universitätskolleg" as scientific assistant at the Faculty for Educational Sciences, Psychology and Human Movement at the University of Hamburg. My research interests are game based learning, second order gaming, media theory and (radical) constructivist approaches. I like pen-and-paper-roleplaying, especially in contemporary horror settings like "KULT" or "Call of Cthulhu".
View all posts by Wey →
This entry was posted in culture, education. Bookmark the permalink.